We took a little trip down to the hospital to pick up the artwork that we did on the last day with Kierra.

It was nostalgic to say the least. I felt like I was walking in a dream until Kobe broke the silence with his enthusiastic, “See Kierra!” when we pulled into the driveway.

Little children look at life with such simple acceptance and faith. We told him Kierra wouldn’t be here. That she is in heaven. That was OK with him. He didn’t fight or try to reason. He just calmly moved on.

Now we as adults can’t do that as easily. Our questions are so much bigger and broader and deeper. They affect everything in our lives and run through our minds in waves of volume. We are these battle weary, hurting souls that spin a cynical twist to pain. We throw heart tantrums and play ‘not fair’ and ‘get you back’. We aim our frustration and fear and hurt and insecurity at a supposively loving God who we were taught to honor and respect.

It would hurt me very much if Kobe would never ask me “Why?” (or rather, “huh?'”:) If he would never mention Kierra.

If instead, he would go around, raking me over the coals behind my back, questioning every thing I told him that is true.Even that I love him. If he would blame me for all the pain and loneliness in his little life right now. If he would put big black marks on his chart against me and show everyone that I am a scam of a mommy who doesn’t care about him. If he would embrace that chart until the lies become his life.

It would hurt worse then him pounding on my chest, crying out his frustration from a hurting, weary, lonely, confused heart.

Perhaps that’s one reason Jesus said we should become as little children. It’s Ok to ask why. To be alone and sad and hurt and to not understand. To cry out to our Heavenly Father and let Him comfort us. It is not His fault that life hurts right now. Just as Kobe fully believes that we love him and what we tell him is true, so our Father wants us to trust Him.

Kobe could have spent the whole day and all of his energy on a search all over that hospital for Kierra. Instead, he let us pull him in the little red wagon. 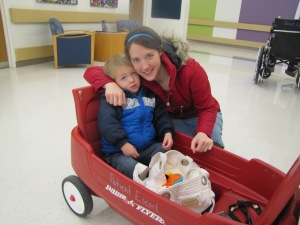 We can do the same. Running ourselves ragged trying to find the meaning to life and questions and that real evidence that we think we HAVE to have. Or we can simply trust God to take us to the answers in His own time and His own way. We can rest in peace that He knows what He is doing. That life is NEVER bigger then Him. We can relax and try to find joy in the little things in life. 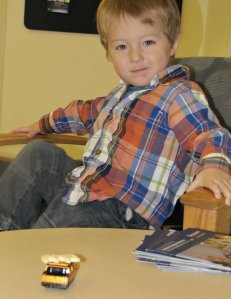 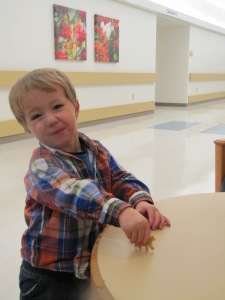 We had to wait for hours until they located the artwork for us to bring home. It was locked away in an office on a weekend or something weird like that. But it was worth the wait. Now we have our fingerprints all over the canvas. It is still waiting on a frame. But, good things take time, right? 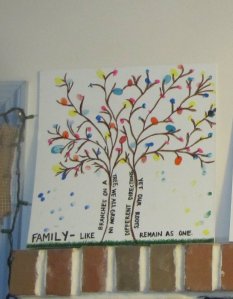 5 thoughts on “Because Life is NEVER Bigger Then God.”