We did the thing I didn’t think I would ever do! And was it ever fun 🙂 We bought tickets, checked our passports, made arrangements to leave Kierra with family, and left the country for 7 days! Now maybe this doesn’t sound so amazing, but for us,it really is a miracle!

I don’t know how often i thought we were totally nuts to go and leave Kierra behind. It was one of those things we thought God wanted us to do and we wanted to do and we thought we should do and it worked out to do. So we did it. And I tried to just turn my mind numb to all the things that COULD happen. And guess what? Most of them DIDN’T happen!

A week or two or was it three? 🙂 before we left. Kierra developed stomach ulcers, so we had just gotten her ‘stabilized’ as in not crying and uncomfortable or whimpering nearly every ‘awake’ moment. Her schedule was very rigid since she needed meds every 6 hr on an empty stomach and since it’s hard to get her necessary amount of feeding into her in a 24 hr. period without having to stop to let her stomach ’empty’.

So with an hourly schedule

lots of medication info (she was on at least 10 different meds :()

suction info (for when she chokes)

oxygen info (for when she needs a boost)

but Jason and Karen got her all loaded and packed away safely in her car seat and Kobe and I waved goodbye and she was off for Maryland and cousin time and I was standing in my house wondering what in the world to do next and trying to think that this really would all be OK.

Believe it or not, I put Kobe down for a nap and crashed myself and woke up feeling more like a person then I had in quite some days.

I gathered our stuff together and packed our bags and we had so little compared to Kierra that i was SURE we were forgetting some drastic thing! Steve came home from work, and we finished packing. Early the next morning, we jetted off! 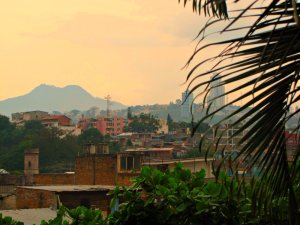 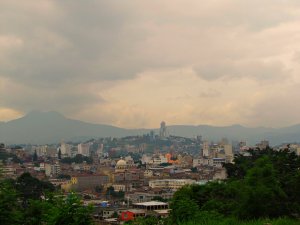 Steve’s parents are in their fourth year of mission work in the mountains of Honduras. They plan to return to the States this fall/winter, and were so thankful we could visit them before they closed this chapter in their lives. We hadn’t seen them for about a year and a half, so we had a wonderful time reconnecting and introducing Kobe to them!

A few shots of our days… 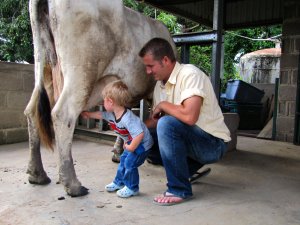 ‘visting’ with the neighbor girls 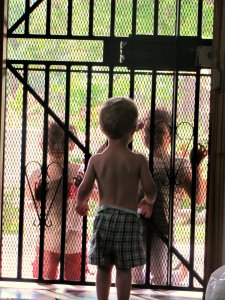 hiking and piggy back rides with Grandpa 🙂 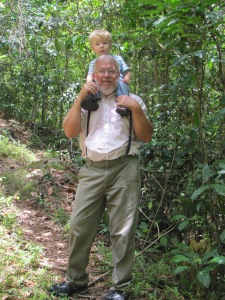 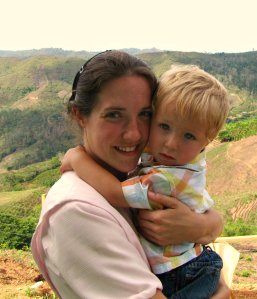 cooling off at the waterfall 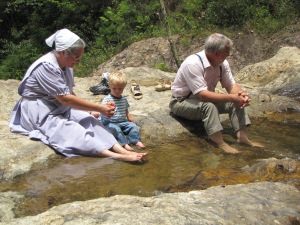 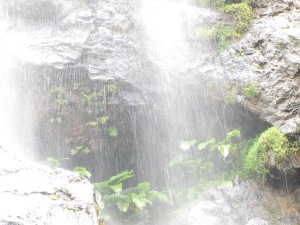 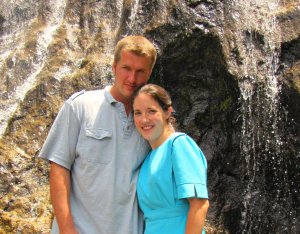 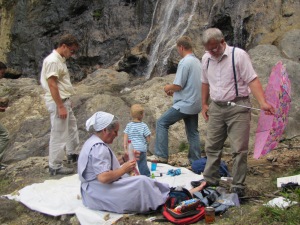 A hillside covered with coffee plants. This is a huge moneymaker for the natives, but it takes LOTS of HARD manual labor. 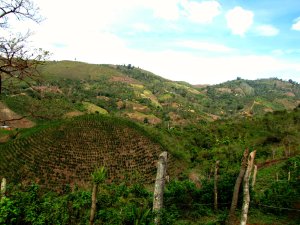 The country is gorgeous!! Especially from the back of a truck. It’s when you carry a sick child for miles over these mountain roads that you realize what HARD is! (maybe a little like elk hunting in Montana 😉 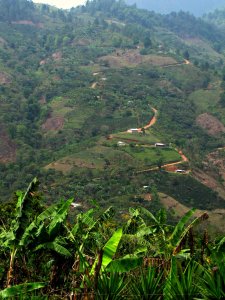 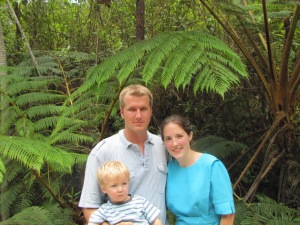 Meanwhile, back home, Kierra was doing great after giving everyone a good scare.

She was very fussy one night, and Karen was holding her. When she went to lay her down again, to her utter horror, she found her feeding tube (MicKey) laying in her crib! She stared in panic at the empty hole in Kierra’s belly. Her nightmare had actually taken a ‘real to life’ , ‘this is happening’ turn! It was midnight and the world was asleep.

To make a long 24 hr  story short 🙂 They went to the nearest good ER which was in West Virginia, since they couldn’t get the new tube in themselves. The Dr. in the Er couldn’t get it in either. Her stomach seemed to be ‘growing shut’ already. Now they had two options. Either put her through another surgery to insert a Gtube or take her to The Children’s Hospital in Deleware which was around 5 hr. away.

So they called us. I have no idea how long or often they tried to get through to us, but eventually, they called the missionary neighbors who came over and rapped on Dad’s window who eventually woke up and rapped on our door until we eventually woke up and tried to shake the cobwebs from our brains. With the time zones between here and there, we had just drifted into our first sound sleep. Karen stood in the waiting room in the ER and laughed herself silly to hear me trying to wake Steve and explain what was happening 🙂 He is a WONDERFUl sleeper. I usually envy his conked out way of shutting down!

We voted for them to go to Deleware since we trusted the Dr.s very well there, and in case of a prolonged hospital stay, it would only be an hr. drive  from  our house instead of 6 hr.

So they were released from one Er and started out to the next one. My parents met them in MD and drove them to Deleware. Dad had fun flashing his four ways and cruising along beside a police car for a while. They made the drive in an hour less then usual and wheeled into the ER at around 8AM. Kierra thought it a great adventure to be out and about in her carseat in the middle of the night. She cooed and laughed and had no idea of the stress everyone else was in.

The Dr. at Dupont was SUPER! I think God had him there for a reason! He worked gently and efficiently and got a tiny catheter into her belly. Every half hour, he inserted a slightly larger one until he had her all the way up to her regular size!

Now don’t you call that a God Thing!!  Just a little discomfort and lots of stress for her caregivers…but God came through…just like always 🙂 And this time, there was NO Surgery!

I was one relieved Mama! I was ready to pack my bags and fly back on the next flight out when i heard the word Surgery 🙂

We totally enjoyed the rest of our time and I think Kierra did too.  It did me a world of good to have a change of scenery and pace of life. To see a Big Beautiful World out there that is full of God and hurting folks that need His Love!

Kobe loved flying! The clouds looked like ‘bubbles’ to him from the plane window 🙂 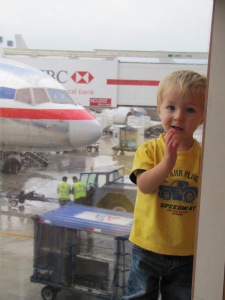 We had a dead van battery when we landed in BWI at midnight:( Kobe slept most of the time as we waited for the jumper guy to come by. He was VERY tired of traveling though! 🙂 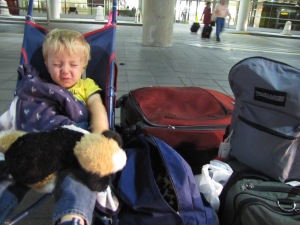 Can’t you  tired gritty ‘can’t open my eyes’ ‘middle of the night’ ‘let me alone’ feeling!

Were we ever THRILLED to get home and snuggle her again! Oh how I LOVE her!!! 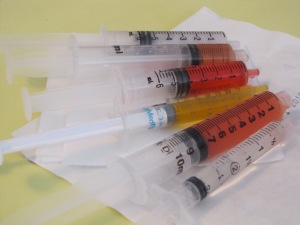 coming up next….just a bunch of brightness for those who love color!

4 thoughts on “Of Travel and MicKeys.”

On Finding Clarity in Chaos